There's a full weekend of fun planned here in Troy this weekend:
* Troy Night Out happens this evening. Beginning at 5 p.m., the streets of our city will come alive with Troy Night Out. Plenty of music, food, and excitement each last Friday of every month. Special performance tonight by Latin DJ, Gabriel Lozado.

* Saturday at Powers Park  --- 1st time appearance at the popular concert series by the legendary, Refrigerators. Showtime is 6 p.m.

Got nothing to do this weekend --- look no further.
ENJOY TROY!
Posted by Vito Ciccarelli at 7:13 AM No comments:

If you enjoy Southern Rock, join us at Powers Park this Saturday for a tribute by the Killer B,to the best of the best, the Allman Brothers. Over the years the popular concert series has presented numerous tribute shows including tributes to, Billy Joel, Beatles, Rolling Stones, Elvis, Neil Diamond, & Janis Joplin. The Allman Brothers have long been considered the grand-daddy of  all the great Southern Rock groups, bursting on the national scene with the release of their amazing, "Live at the Fillmore East ", album in 1971. The Killer B will feature the dynamic duel guitar work of masters, Joe Mele, and Frank Daley, along with the Killer B signature Hammond B3 keyboard work of the amazing, Tony Perrino. Showtime is at 6 p.m. on July 23. Food & non-alcoholic beverages are available at the shows. There is a no alcohol / no dog policy at the shows.
The Powers Park Concert Series is presented by the City of Troy, & Wellcare. They are supported in part by, Whitney Young Health Center / Troy, The Snowman, Northeast Shuttle, Beverage Barn, Barrett Blacktopping, Troy UFA, New Dawg in Town, and the Friends of 112th St. For up to date show info, call, 279-7162. 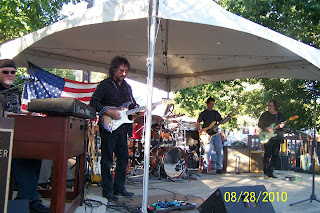 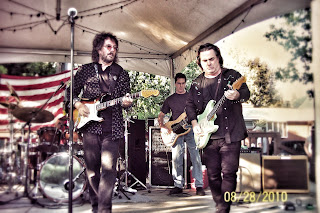 Posted by Vito Ciccarelli at 5:57 AM No comments:

Troy's Going To Be Hopping This Weekend:

Back 40 Band
Troy is the place to be this weekend, with multiple events happening, at two points in the city. Beginning at 10 am on Saturday, the 4th Annual Troy Pig Out, at Riverfront Park will kick off. Last year, more than 30,000 attended this wildly popular bar b que event. 5 bands will be performing on Saturday, beginning at 11 a.m., including, the Lustre Kings, Sly Fox & the Hustlers, with local legend Ernie Williams headlining. Sunday's musical lineup includes, the Vibratones, Joe Mele Blues Band, along with the recently reunited, Emerald City. Hailed as the top local band in the 1980's, Emerald City will hit the stage at Riverfront Park at 2:30 p.m. Join us for all the food and music over the weekend.
The Back 40 Band will headline this weeks country show at Historic, Powers Park in Lansingburgh. Long recognized as the area's # 1 country act, the group will perform at Powers for the first time. Having opened for such national acts over the years as, Trica Yearwood, Rascall Flatts, Diamond Rio, and Billy Ray Cyrus, the group has maintained a high level of excellence over the past two decades.
Their show kicks off at 6 p.m. on Saturday evening. No alcohol or dogs are allowed at the concert series.
Bring your own lawn chair.
Posted by Vito Ciccarelli at 6:48 AM No comments:

For all the details, visit, www.troyrecord.com  Or, read today's Record, page 6. It's going to be a beautiful afternoon, so join us for the Neighborhood Safety Day at 4 p.m., & our opening act, Cupcake Explosion at 5:45, with headliner, Four at 6 p.m.

Enjoy Troy!
Posted by Vito Ciccarelli at 8:25 AM No comments: