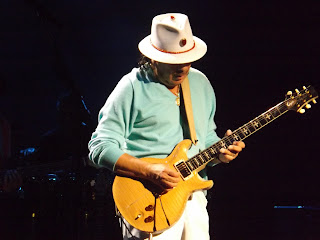 Tonight's Carmine Dio & Roaring Thunder big country show at Powers Park isn't happening folks, due to this well needed soaking we're getting.
The show is re-scheduled for Saturday, Sept 8, at 6pm.
No music tonight, but here's a pic of Carlos Santana, up close & personal I shot last night at SPAC. Great show by the way! See you all next week at Powers for Classic Rock Night with the amazing, Emerald City. Showtime is 6pm.
Posted by Vito Ciccarelli at 10:49 AM No comments:

Country Night returns to Historic Powers Park this Saturday, with Carmine Dio & Roaring Thunder making their first appearance at the Lansingburgh music mecca.
Long considered one of the most dynamic local country singers in the region, Carmine's stage presence takes over the crowd, along with his seasoned ability to get concert goers, both young & old,  into his song styling web of country magic. Showtime is at 6pm, July 28. No dogs are allowed.
Check out his webpage for free music sample's of his latest CD, 'Boy's Night Out'.
Posted by Vito Ciccarelli at 8:22 AM No comments: 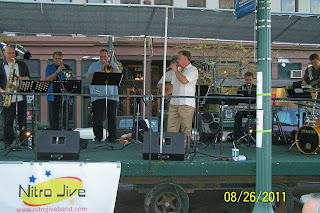 Powers Park will be Be-Boppin on Saturday night to the big swing sound of Nitro Jive. The eight piece powerhouse makes it's first return to the historic park in 6 seasons with a new lineup, and a , 'take no prisoners' attitude. Led by vocal master, Bill Deuel, the group puts its audience into a dancing frenzy, with spot on replication of music's greatest swing bands. Showtime is at 6pm on July 21, with a NO DOG policy in effect at the show.
The Powers Park Concerts are presented by Mayor Lou Rosamelia & the City of Troy, along with health care provider, WELLCARE. They are supported in part by Whitney Young Health/Troy, Snowman, Beverage Barn, Northeast Shuttle, Lansing Laundry/Gamers LLC, Barrett Blacktopping, Tri City Valley Cats, and the Friends of 112th St.
So join us for all the fun and great music right here in your hometown Troy.

Posted by Vito Ciccarelli at 8:32 AM No comments:

Prospect Park Jazz kicks off on July 20, at the historic Troy park, located on Congress St. We're fashioning this, similar to the popular, Powers Park Concerts, beginning with 2 shows in it's first season. Depending on the success of the short season of shows, we plan to expand the series next season to a full, 6 week schedule. Our first show will feature keyboardist Jim Wilson, and his quartet. Food & beverages will be available, with RBC Jazz Club serving beer & wine, as an extra added attraction. Beautiful weather, historic park, and America's truest musical artform, all add up to a peaceful, relaxing evening. So join us for all the fun. Enjoy Troy! 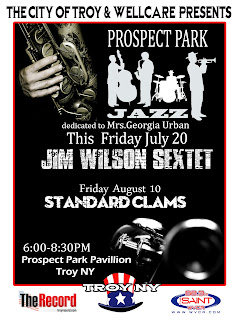 Posted by Vito Ciccarelli at 8:22 AM No comments:

Thousands of people will be visiting Troy on Saturday & Sunday to eat some of the best BBQ, this side of the Mississippi. They'll also be coming to hear some pretty good music, at two separate events.
The 5th Annual Troy Pig Out kicks off at 10am, on July 14, with the music starting at 11am. Over the course of the 2 day event, you'll be treated to a diverse array of musical styles, ranging from Blue Grass, Blues, and some pretty darn good rock n roll. Headlining on Saturday will be Blues master guitarist, Albert Cummings.
Also appearing will be Troy favorites, Super 400, and swing kings, The Jump Daddies. The Sunday lineup, also beginning  at 11am, features the immortal local legend, Charlie Smith, as well as Blues Sanctuary, and the electric newcomers to the local blues scene, Collette & the Mudcats.
Bring your appetites, cause like I said earlier, the food is Large & in Charge. Pulled Pork, Ribs, Brisket, & Chicken, as far as the eye can see. BBQ teams from across the USA will compete for cash prizes, as well as the honor of displaying, the 'Golden Pig', which is awarded to the overall winner, to display at their business for the next year. There is also numerous festival food vendors available is you so choose. Just Google, Troy Pig Out for the full schedule of events.
Also happening on Saturday night, is the return of the legendary, Refrigerators, to the Neil Kelleher Stage at Historic, Powers Park. Showtime is at 6pm. Long recognized as the Kings of local horn bands, the group just keeps getting better & better every year. Their legions of fans, flock to their shows, which resulted in the band drawing the largest crowd ever in the history of the popular concert series -- as well as it being one of my own personal favorite shows I've ever heard performed over the past eight seasons -- and I've been to every single one.
Troy is giving you options this weekend. So DVR the Yankee games, and join us for all the fun, food, and great music. ENJOY TROY!
Posted by Vito Ciccarelli at 8:34 PM 2 comments:

Season 9 of the Powers Park Concert Series begins tonight at the historic Lansingburgh venue. Over the years the popular FREE concert series, has become a destination spot for many, each & every Saturday evening. Not only having a strong local following, the concerts attract music lovers from neighboring states such as Vermont, Massachusetts, &   Connecticut.

Opening the series tonight with a bang, Funk Evolution, voted the area's #1 party band in 2012 in the recent, Metroland Readers Poll, this high energy,big horn, powerhouse, has been captivating local audiences for the past several years. Comprised of some of the top musical talents in the area, their chemistry together provides their audiences with some of the best, funk n soul you'll ever experience at a live show.
Powers Park Concerts are presented by Mayor Lou Rosamelia & the City of Troy, along with health care provider WELLCARE. It is supported in part by Whitney Young Health/Troy, Snowman, Northeast Shuttle, Beverage Barn, Lansing Laundry/ Gamer's LLC., Barrett Blacktopping, Tri City Valley Cats, and The Friends of 112th St. Media advertising is  provided by The Record & WVCR, 88.3fm, The Saint.
Food & beverages are available at each show, as is face painting for the kids. No pets are allowed please. Bring a lawn chair or a blanket. Showtime is at 6pm.

THE SHOW WILL GO ON TONIGHT. I WILL UPDATE THIS BLOG LATER TODAY IF ANYTHING CHANGES.

Posted by Vito Ciccarelli at 9:02 AM No comments:

I decided to check out the 1760 Manor Inn this weekend, and let me tell you -- the food was just GREAT. Located at 499 2nd Ave. , the most recent reincarnation of this Historic Lansingburgh eatery, is a homerun in anyone's book. As it was as the Olde Daley Inn, 499 House, Mahoney's, MJ's on the Avenue, and Rennihans, this 17th century structure, still has all the charm, & class that I remember from years gone by.
Having a hankering for a big slab of beef, I made my way down for a meal --and what a great meal it was. I ordered the 20oz cut of Prime Rib, and it came out cooked to perfection, as well as being a good quality cut of meat. The sides were fresh, with the presentation screaming, 'quality meal here Vito'! The bill for two (2 prime rib dinners, sides, and a couple of beers, came to $49. Wow!
My waitress, Nicole, was first rate also. I hate when you're trying to eat and the waitress comes over every 30 seconds to see if your meal is acceptable, and expects an answer when your trying to chew. None of that at the 1760. She stayed on top of things while waiting on all the downstairs tables, and I never wanted for nothing. My compliments to the owners for hiring this first rate server.
1760 still has that classic charm, and class I remember from my first visit there, more than 40 years ago (Olde Daley Inn back then). I would highly recommend this eatery for celebrating any type of occasion you may have. Or, just for an inexpensive night out. Other reviewers give stars to rate restuarants. But me, I'll give the 1760 Manor Inn, a 5 meatball rating! Try it, you won't be dissappointed.
Posted by Vito Ciccarelli at 8:37 AM No comments: