The Lansingburgh community is banding together to help out one of its own. Tim & Marion McDonough, and their children were burned out of their home several months ago. They have been living in a hotel waiting for their house to be rebuilt ever since. As you can probably imagine, the McDonough's are laying out quite a bit of money eating out -- along with other massive expenses related to living in a hotel for an extended period of time.
Longtime friend, Kevin Vandenburgh, along with Pip's proprietor, Janis Zanda, and myself will be hosting a fundraiser at Pip's Athletic Lounge on Sunday, May 1, beginning at 2 p.m. Suggested donation is $20, with every penny going to the McDonough family. Food, music, and raffles will highlight the day, which I'm sure will be strongly supported by the community.
The McDonough family has been in the 'Burgh for generations, and have been active forces in the community.. Tim & Marion have volunteered their time, as their children have gone through Lansingburgh sports programs -- with Tim still coaching. Their daughter Mindy is the new coach of Knickerbocker Middle School's modified baseball team --and doing a fine job I might add! The point I'm making here is that they are a large part of the 'Burgh, and it's up to us, their neighbors to help them out during this major disruption of their lives.
If you can't make it to the fundraiser and would like to make a donation, please make your check out to:
Tim or Marion McDonough
send to:
The McDonough Fund
PO Box 251
Troy NY 12181

Tickets will be available at the door, or send me an e-mail at, vitociccarelli@gmail.com - to reserve a spot..
I hope to see you all there. It's all about the 'Burgh!
Posted by Vito Ciccarelli at 8:10 PM No comments:

EXTRA, EXTRA::Easter Bunny Coming Back to the 'Burgh 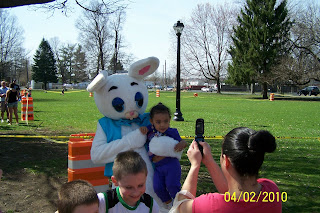 4/18/2011 (Lansingburgh); The world famous, Easter Bunny has announced he will be making a return appearance at Historic Powers Park on Saturday, April 23, at 12 p.m. Last year he performed to a SRO crowd of happy children, at the Summer mecca for lawn chair concert goers. "Over the years I've traveled to many communities to participate in their local egg hunts. But the 'Burgh is special to me, and the children always make me feel right at home, " said Mr. E. Bunny
Last year, more than 200 children attended the hunt, with at least 200 happy children leaving with candy and a smile. "I think it's just great that the folks at Hannaford Supermarket, and Whitney Young Health in Troy donate all the candy for the hunt every year. And it's nice of the City of Troy to donate the use of the park too," added the Easter Bunny.

This years event will begin at 12 p.m.. It is open to children ages 1 -10 years old, and will be held, rain or shine!
Posted by Vito Ciccarelli at 5:51 PM No comments:

In case you hadn't noticed, Chubby's has returned to the 'Burgh. The corner of 114th & 5th Ave is once again complete, with the re-opening of Chubby's Subs. The eatery shut down for a few months, to re-organize, and re-energize what I call, the 'Bermuda Triangle' of my stomach. Between Chubby's & Snowman Ice Cream, I'm sure my battle of the bulge will once again be a losing battle. You see, I, like many others suffer from this eating affliction of HAVING to combine, a Top Rounder, with a cone from the Snowman. I'm sure that this combo does not meet the new recommendation by the federal government, that we eat no more than 600 calories per meal.
If you remember what a Neba was, and haven't tried Chubby's, I recommend that you do so right away. I've seen so many different places try to replicate a real Neba over the years. None have been able to replace the iconic sandwich in my opinion -- until Chubby's came around. Real, fresh cooked roast beef, on a sesame roll -- now thats the real deal. They also have great subs, soups & salads, all at very family friendly prices. Not to mention the homemade potato chips -- which I normally do not eat -- but who can resist those homemade spud delights at Chubby's?
Welcome back Chubby's --- you were missed. Remember to support your local businesses & eateries as much as possible. Every time you go across the river to spend your expendable income, you increase the chance of having a vacant storefront in your community. Enjoy Troy!!!!!!
Posted by Vito Ciccarelli at 8:03 AM No comments: