Rockin on the River continues it's stellar season tonight, with a first time Troy performance by headliner, Robert Eric -a Billy Joel Tribute artist. Robert's voice is dead on accurate in mimicking the voice inflections of Billy Joel. Backed by a fantastic group of musicians, the group promises to thrill fans, both young & and old.
Tonight's opening act is solo performer, Rich Ortiz --recognized by many as being the #1 solo artist in the Great Northeast. Rich's 'white soul' is always a crowd pleaser. Show starts at 5 p.m. So join us tonight for all the fun and excitement, and come to Enjoy Troy.
FYI: Beginning next week, Rockin on the River will be moving to Riverfront Park from it's present location. 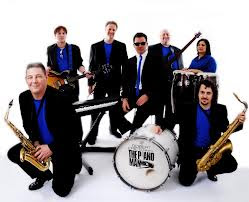 Posted by Vito Ciccarelli at 10:52 AM No comments:

See You On The Other Side My Friend: 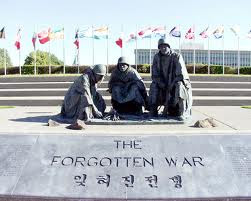 I try not to put personal things on my Blog, but a dear friend of mine passed yesterday and I need to say a few things about him. Gus Demars died in his chair on Monday, while just sitting there chatting with his lady of the past 37 years, Shirley Kelly.

He's been battling cancer for quite a while now, but stayed active with the Uncle Sam Day Parade Committee, as well as helping out with the weekly 50/50 raffle at the Powers Park Concerts. Gus served on the parade committee since day one, and was active in making people remember, and advocating for the Korean War vets. If Gus happened to enter the concerts while I was on stage with a live microphone, I would always announce his entrance --sometimes telling people he was the last remaining Civil, or Spanish American War vet alive. He always took my insults for what they were--me just joking with a friend.
I used to tell Gus that when his time came, St. Peter would open up the pearly gates of Heaven for him quick so he could get away from Shirley faster. We had some incredible conversations over the 13 years I've been involved with the parade. I liked this man, I loved this man, and I respected this man. Like many veterans, Gus didn't like to get into details of certain aspects of war. But the stories he did share of his time overseas were fascinating, to say the least.
I would sometimes call him, 'Cotton Hill', from a character on the TV show, King of the Hill. He never knew what the heck I was talking about, but would laugh, and raise a fist in mock anger at me  -cause he knew the remark was probably not a compliment! Gus and Shirley loved the attention I showered on them over the years, both from the Troy stages, and in this newspaper.
The parade certainly won't be the same without him -same for the concerts. To his 8 children, along with my friend Shirley, my heartfelt sympathies go out to each and every one of you -- his family. Gus was hero in my book. I'll miss him a great deal.
Posted by Vito Ciccarelli at 2:06 PM No comments: 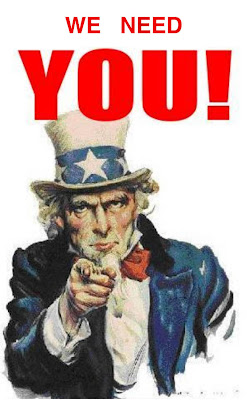 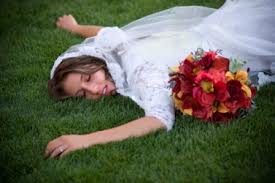 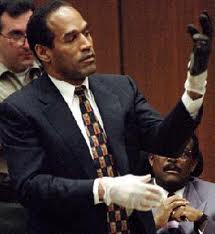 We need you for two things:

1) To help support the upcoming Uncle Sam Day Parade.
2) To help us solve a murder --OJ may or may not assist.

So join us this Friday for a night of good food, and quality entertainment --and help solve this whodunit. Help support the 38th Annual Uncle Sam Day Parade. Coming to you on September 15. Shirley Kelly or Gus Demars were not harmed in the production of this play!

Refrigerators Will Put The Big Chill In Powers Park: 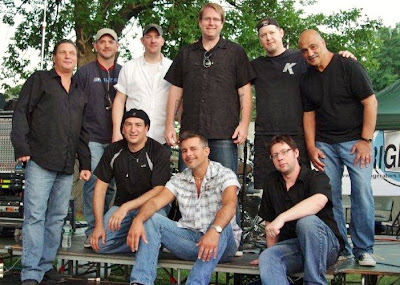 The gran-daddy of local horn bands, the Refrigerators, make their third appearance at Historic Powers Park this Saturday. Now in their 21st year of performing in the Great Northeast, the group continues to thrill local audiences, bringing them to a fever pitch with their rock solid, unmatched performances.
Formed in 1992, the Refrigerators have become one of the most sought after bands ever to hit the local music circuit. Consistently voted 'Best Band' by many local music polls, the Refrigerators infuse funk, rock, and R&B with a driving rhythm section, powerhouse horns, and offer a kinetic stage presence. The result is something you need to hear and see for yourself.
With their trademark high energy performances, they have earned  a spot on bills with such industry giants as the Village People, Average White Band, 98 Degree's, Joe Walsh, Government Mule, Sugar Ray, and KC & the Sunshine Band.
The Powers Park Concerts are presented by the City of Troy, along with health care provider WELLCARE. They are supported in part by Whitney Young Health/Troy, Snowman Ice Cream, Lansing Laundry, Beverage Barn, L& B Grocery, Advanced Auto Parts, Tri City Valley Cats, and the Friends of 112th St. Media sponsorship is provided by the Record, and WVCR, 88.3, The
Saint.
There is a strict 'No Dog' policy in effect for each show, so leave Fido at home. This weeks 50/50 raffle will benefit the upcoming (Sept 15) Uncle Sam Day Parade. Deposit can donations will benefit Central Little League. Showtime is from 6 -8:30 p.m.
Make Powers Park in Lansingburgh your destination this weekend to enjoy this free show, with one of the Capital Regions most legendary bands. Join us and 'Enjoy Troy'!
Posted by Vito Ciccarelli at 2:13 PM 6 comments:

America's music takes over Prospect Park tonight with the first installment of the Prospect Park Series.
Everything kicks off at 6:30 with a performance by Groove Nouveau. Showtime is at 6:30 at the Prospect Park Pavilion. No Dogs or glass bottles are allowed/ Food & beverages are available. The series runs through August 9.
Posted by Vito Ciccarelli at 11:44 AM 1 comment:

Crazy --If You Miss This Show:

This weekend at Powers Park will feature the amazing talent of Ms. Courtney Shayne, performing a tribute to country icon, Patsy Cline. Since she burst onto the local music scene several years ago, this young lady has been leaving crowds in awe of her dead on renditions of the timeless music of  the country great. Anyone who has seen this young lady sing say the same thing --she's absolutely wonderful, and it's a great show! Courtney hits the Neil Kelleher Stage at 6 sharp this Saturday.
Powers Park Concerts are presented by The City of Troy & Wellcare. They are supported in part by Whitney Young Health Center, Snowman, Beverage Barn, Northeast Shuttle, L&B Grocery, Lansing Laundry, Advanced Auto parts, Tri City Valley Cats, and the Friends of 112th St. Media sponsorship is provided by the Record & WVCR 88.3 The Saint.
This weeks 50/50 raffle will be supporting the Uncle Sam Parade Committee. The are no dogs allowed (except service dogs), and no glass bottles.
If you don't join us --you're Crazy!!!!!!!!!!! 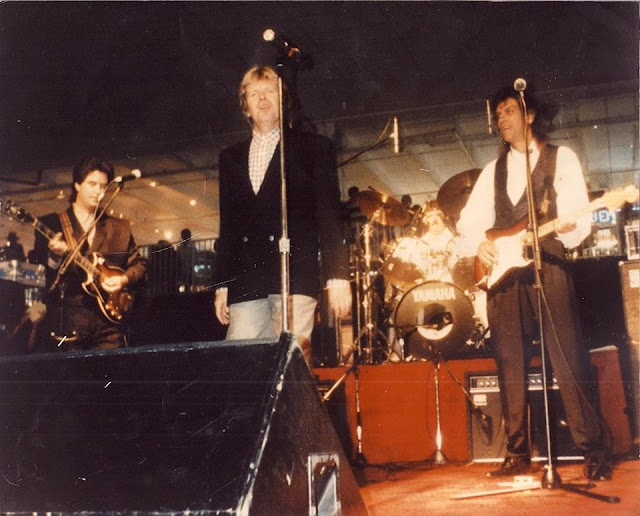 This posting is an open invitation to anyone who reads it. Joe Mele & I have have partnered with Revolution Hall at Brown's Brewing Co, to plan a fundraising effort to help out a former charter member of the local music scene, Dan O' Brien. That's Dan on the left, playing with Peter Noone, formerly of the 60's pop/rock group Herman's Hermits.
He left the area some years ago, making his move to warmer weather in Florida. Over the years, he continued his musical career down south, both performing, and as a studio technician. About 6 months ago, he was diagnosed with Parkinson's Disease. Needless to say, for someone who play's at an extremely high level like Dan, Parkinson's isn't the news you would want to hear from your doctor. Another old friend, Jack Daley, who went on to play bass guitar with Lenny Kravitz, contacted me on Facebook, as did Jim Madden. They had an idea to raise some money for Dan. Joe Mele & I contacted Carrie Harkin at Brown's, and the deal was sealed.
We've put together a fantastic musical show to get you there. The Daley Brothers, Jack, Frank, and Joe (of Super 400) are reuniting for this special night. Emerald City is also donating their time, as are some pretty special musicians from around the Northeast, as well as NYC, who are making the trek to Revolution Hall. We'll also be doing a 50/50 raffle, along with giving away some gift certificates. Brown's fine craft beers will also be available. And if you do drink, the Rensselaer County Safe Ride Program (Netters Fund) will be available to those who partake, and shouldn't be behind the wheel of a vehicle.
Cost of this musical extravaganza is only $10 --but, you can donate more at the door if you would like. So if you're not busy, and want to hear some of the best rock n roll anywhere, join us at Revolution Hall Friday night. Doors open at 6:30 p.m., with the music beginning at 7 p.m. I hope to see you all there. Cmon out and Dance for Dano!
Posted by Vito Ciccarelli at 12:30 PM No comments:

Pig Out -Vegan's Nightmare This Weekend: 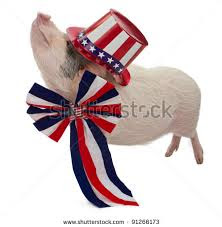 The 2 day event is always a crowd pleaser with all the meat you can devour, as well as plenty of music. Over the course of the event, you can hear such acts as Albert Cummings, Stellar Young, Twangbusters, Moonshine Holler, Hill Hollow Band, Hair of the Dog, and the Graham Tichy Band. See Andrew Beams story in today's Record, or go to, downtowntroy.org for more info. No animals were harmed in the writing of this blog. Oink oink!
Posted by Vito Ciccarelli at 9:14 AM No comments:

Rockin on the River Goes Funky:

In case you missed them at Powers Park last weekend, the area's # 1 party band, Funk Evolution will be headlining tonight's Rockin on the River. These guys are just a fantastic group, who don't fall into the, 'cookie cutter' mold that far too many bands do these day's. They cover tunes with precision, and in all the times I've booked them, they never have failed to bring the crowd to their feet dancing. Rockin on the River kicks off at 5, so bring your dancing shoe's --you're going to need them. Enjoy Troy!
Posted by Vito Ciccarelli at 7:52 AM No comments:

Funk Evolution takes to the Neil Kellher Stage for the July 6 kick off of the Powers Park Concert Series. Showtime is at 6 p.m. And don't forget there's a Family Safety Program being facilitated by the North Lansingburgh Neighborhood Watch, and supported by the Troy PD, Troy FD, Rensselaer County Stop DWI, and the Rensselaer County Sheriff's Department. For all the info on the shows, read the Record, or listen to WVCR, 88.3 FM, The Saint.
Absolutely NO DOGS or GLASS Bottles are allowed. Bring a lawnchair.
Posted by Vito Ciccarelli at 6:51 AM 4 comments:

Don't Stop Believing -In Troy Events That Is:

The musical magic of rock legends Journey, comes alive at Troy's 'Rockin on the River', this Wednesday evening,  with a first time Troy performance by Separate Ways --the Ultimate Journey tribute act. There are many Journey tribute bands across the country, but there is only one Separate WaysThe Band.If you're ready to be taken on a Journey like never before, then July 3 will be your chance to experience it, right here in Troy NY. For more info on Rockin on the River, visit, downtowntroy.org
Posted by Vito Ciccarelli at 8:23 AM No comments: