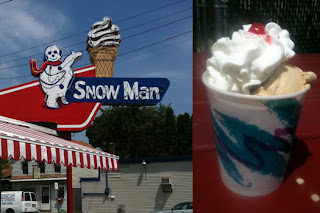 Forget the diets tomorrow folks, cause the Snowman, one of Troy's true destination locations, opens for the season, Saturday, March 9th, at 12 noon.

Owner John Murphy, is one of those quiet hero's of the community. He and his wife Christine appreciate the fact that our community supports their Landmark establishment, and give back to us in many way's --year after year. They were early believers of the Powers Park Concerts, and have been a valued sponsor for the past 8 seasons. They sponsor Lansingburgh youth baseball, soccer, football, as well as pretty much every fundraising event that's organized in this neck of the woods.
Whenever they donate a few gift certificates for the weekly concert raffles, the lucky winners always smile and say, "ohhh -Snowman -yes! The key to their continued success, is that they never break the Golden Rule, which has made the Snowman so popular for 50+ years  -- serve  people TOP quality ice cream at a reasonable price, and treat them with respect. Their product is unmatched by anyone. Just look at the long lines, stretching around the corner night after night. You just don't get that kind of repeat, multi-generational patronage if you're not serving the best. Heck, there's plenty of places to get ice cream during the summer. But judging by the masses that flock to our community to get their ice cream, you'd have to say, Snowman is the best! Many thanks to the Murphy's for being a very big part of the fabric of what makes the 'Burgh a special place.
You know, Lansingburgh is blessed to have a few, true destination businesses. Longtime establishments like Verdile's (the granddaddy), Testo's, & Jimmy's Pizza, bring people from all over the Capital District. New places like O'Brien's on 5th, 41 Sport's Bar on 112th, and the Infinity Cafe on 2nd are defining their own identities, by offering some great food, as does Chef Donnie Graham, of Graham's Lansingburgh Cafe on 5th & 112th. Bill Fisher keeps rising like the Phoenix, with his Willy's Hot Dogs on 5th -- and they just put in a new pizza oven.  To this I say yay.  Independents like Chubby's, have taken on the big sub places, and have been making a dent. Plus, in my opinion, Chubby's 'Top Rounder' has been the only TRUE recreation of the Mike Subb's, Neba -from years gone by.
So take the time this weekend to make the drive up to 114th & 5th Ave, grab an ice cream from the Snowman, then go wash it down with some veal parm from Verdile's or Testo's!

Posted by Vito Ciccarelli at 1:30 PM